The main focus is on understanding topological order in frustrated magnets, the development of many body entanglement and understanding the fractionalized nature of excitations. We are investigating quantum spin models in 1D with both bilinera and biquadratic interactions as relevant for S=1 magnets as well as S=1/2 Kitaev magnets in 2D in the presence of a magnetic field. We have discovered unexpected phases with novel properties in these models.

Quantum spin liquids (QSLs) are an exotic phase of matter in some magnetic systems characterized by a lack of long-range magnetic order down to extremely low temperatures (unlike with conventional magnets) due to strong quantum fluctuations.

Our group and collaborators are dedicated to the search and understanding of QSL.  Its intuitive concept can be understood as the absence of the magnetic order of a system of interacting (but frustrated) spins even at temperatures smaller than the interaction scale. This encodes the idea of a phase beyond the Landau paradigm which is considered to cover all forms of magnetic order, as well as the intuition that a ’liquid’ should be different from a ’solid’. While this negative definition captures the essential phenomenology of the novel emergence in quantum magnetism, it turned out to be inadequate to fully characterize the notion of QSLs. Besides the absence of order, QSLs exhibit many unusual properties, such as fractionalized spin excitations (that carry spin 1/2 quantum numbers compared to integer spin excitations of conventional magnets) and a high degree of quantum entanglement. In the search of a QSL, it is important to bear in mind that some subset of the degrees of freedom should look essentially topological, therefore we are looking for fractionalized excitations and emergent gauge fields in quantum frustrated systems.

In contrast to its higher dimensional counterparts, particles in 1D systems are highly affected by quantum fluctuations which prevent the breaking of continuous symmetries due to the tight constraint in space; they are much more likely to exhibit collective behavior because they cannot escape interactions with each other. This makes 1D systems an excellent playground for studying quantum phase transitions (QPT), fractionalized excitations and disordered quantum spin liquid (QSL) state.
Our group has discovered new phases in one-dimensional quantum magnets in a magnetic field using density matrix renormalization group methods. Our results allows us to connect with exact results in certain limits and to make predictions with quasi-1D magnetic materials. We discovered that the quantum phase transitions in certain 1D spin models can undergo a novel phase transition without the closing or opening of an energy gap, i.e. a gapless-to-gapless transition, which can be understood as a novel Lifshitz transition without Fermi surface, involving the topological change of spinon bands in lieu of electron bands. 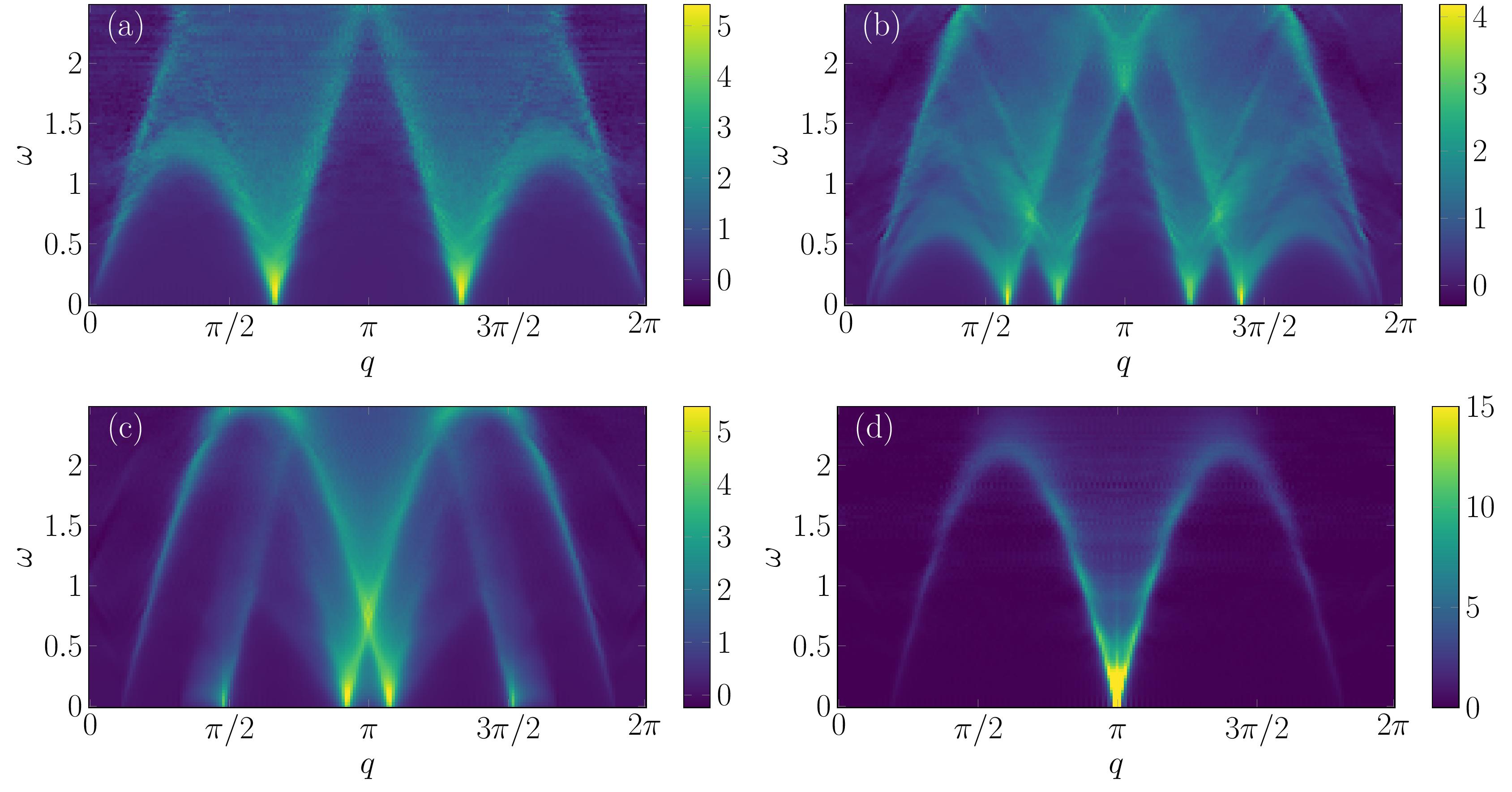 Dynamical structure factor of the quantum spin chain with Uimin-Lai-Sutherland (ULS) interaction under different magnetic field. It is a quantum phase transition characterized by the evolution of soft modes as a function of magnetic field, and a gapless-to-gapless transition made explicit by the fact that all modes retain zero energy during these evolution.