Transport measurements are usually the first experiments to be performed and among the most difficult to understand. In our group we are addressing puzzles in three material platforms: (i) the thermal chiral anomaly in topological Weyl semimetals, (ii) emergent Luttinger channels in transition-metal dichalcogenides, and (iii) Plankian transport in strongly correlated quantum matter.

A Weyl semimetal is a 3D analog of graphene, with Dirac dispersion and an additional breaking of either time or inversion symmetry that create two Weyl nodes with opposite chirality. The chiral anomaly is a breakdown of the chiral symmetry in a Weyl semimetal, when electric and magnetic fields are applied in the same direction as that of the separation between the Weyl nodes, driven by charge pumping form a node with positive chirality to the negative chirality node. We investigate the more robust thermal analog of the chiral anomaly in response to an applied thermal gradient in topological Weyl semimetals. 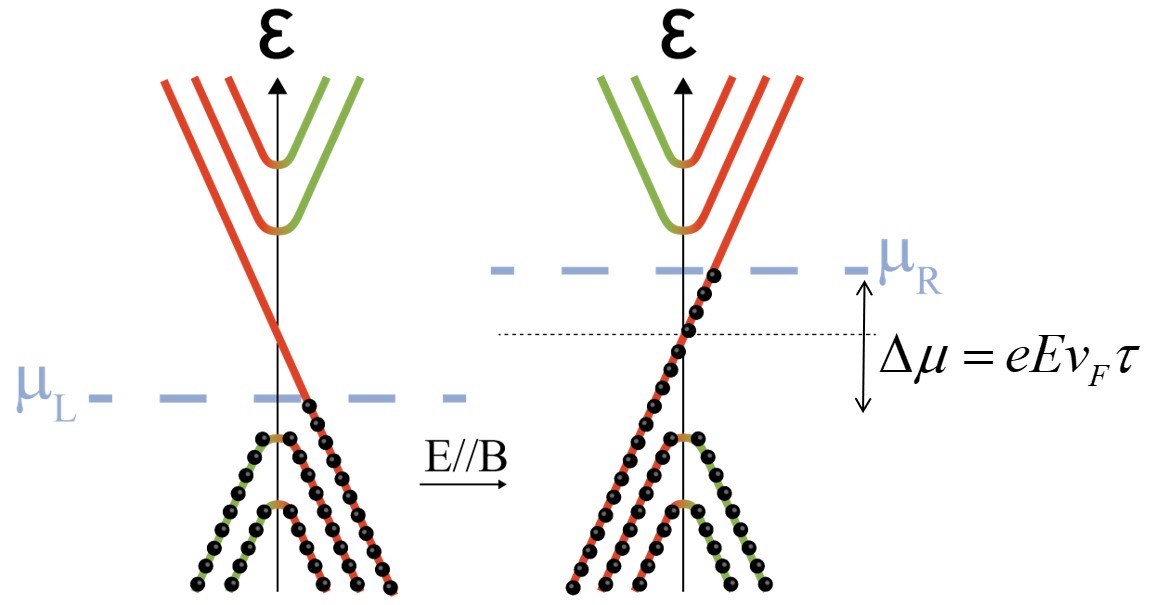 Our group and collaborators are investigating the interplay between correlations and large spin-orbit coupling present in layered transition metal dichalcogenides systems (such as TiS2, TiSe2, TiTa2, among others), in particular the effect that chemical potential doping has on the charge density wave (CDW) formation and its transport properties [1-3]. Recent work has shown that Pt-TiSe2 samples undergo a metal-to-insulator transition explained by the creation of a network of narrow conductive channels, i.e. CDW domain walls, within the gapped CDW domain present sample [3]. This is characterized in the resistivity by both the enhancement of up to 5 orders of magnitude, and by a temperature power-law dependence. Current explorations include ways to understand transport of a network of narrow channels and their frequency-dependent response.

One of the fundamental questions about the high temperature cuprate superconductors is the size of the Fermi surface (FS) underlying the superconducting state. By analyzing the single particle spectral function for the Fermi Hubbard model as a function of repulsion U and chemical potential μ, we find that the Fermi surface in the normal state reconstructs from a large Fermi surface matching the Luttinger volume as expected in a Fermi liquid, to a Fermi surface that encloses fewer electrons that we dub the “Luttinger Breaking” (LB) phase, as the Mott insulator is approached.